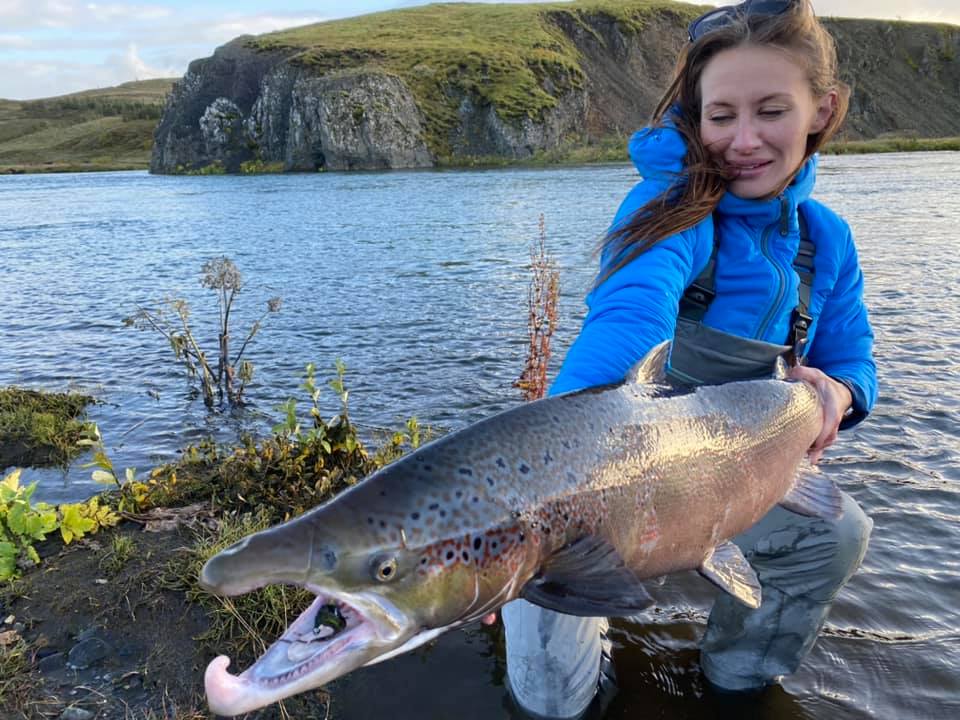 Season is over now with in few days and long winter coming up for us here in Iceland. That is the time that we use to plan next upcoming season 2021. I would like to tell you a little bit what we are up to for next season. We start in Scotland on the river DEE from 1st of February and season less until 15th October. Our trout season in Iceland starts on the 1st of April onward to September, we have one of the best Arctic Charr beat in Iceland if not the best .. the Asgardur beat on the river Sog. Prime time is April , May and to the end of June , it is amazing fishing and comes with the best lodge you can imagine the Asgardur Lodge .. full of comfort , 4 bedrooms , Sauna , Jacuzzi , the lodge is located right on the river bank overlooking some great fishing spots. The beat is exclusive to 3 rods all together .. here you will catch mainly Arctic Charr from 3 to 10 pounds , Sea run Brown trout and big native brown Trout as well.
Our Salmon fishing season in Iceland starts middle of June on most rivers , we are offering you wide selection of full service salmon rivers and self catering salmon rivers all over Iceland , Iceland have some 120 salmon rivers and we have access to most of them. Many of this rivers have different prime time , Tungufljot river is great from end of August to the end of September for 5 weeks , river Sog best time is July and then late September. My all time favorite river Stora Laxá is prime time in July and then again in September. The two Rangas .. East and West Ranga have prime time from 10th July until end of August, the west coast rivers prime time is July and early Agust , the north and the north east coast normally a bit later or from 20th July until end of August.
We open up Greenland our adventure trips to Lax-a camp from 1st July and it is open until end of September , we have numbers of pristine rivers in our area , they are always full of arctic charr from the beginning of the season to the end of the season, it is a dry fly and nymphing paradise , arctic charr is normally from 3 – 8 pounds .. and yes it is high volume fishing and the camp is for sure by far the best camp in Greenland. Trips goes from Tuesday to Saturdays, flights out of Iceland.
Then we do lots of other trips , such as to Russia , Canada , Norway all for Salmon , and then exotic trips to Central and South America , Africa and other places in the world , our last trip was a great fishing safari to Columbia one of the best trip we have ever taken.
So please contact us as soon as possible so we can arrange for you the fishing safari that you desire , there is a great demand specially for Iceland and Greenland because many of us had difficulties to travel this summer and everyone wants to get on the river next summer 2021 , we are here at your service to secure the best fishing possible for you ,
All the best and keep safe and well , Arni Baldursson arnibald@lax-a.is Mobile +354 898 3601
This website uses cookies to improve your experience. We'll assume you're ok with this, but you can opt-out if you wish.Accept Read More
Privacy & Cookies Policy