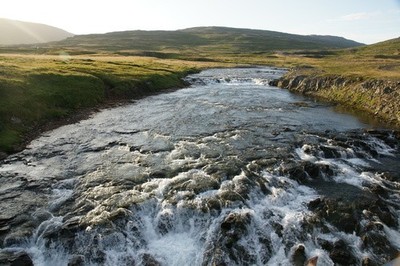 As the season of 2010 is winding down we thought it would be ideal to sum up some of the highlights of the summer.
We openend in early June, as ever, and started with a bang in Blanda. Record catches almost every day and things were looking good for the rest of the season. One after the other our rivers opened with either record opening catches or very close to that.

In July the Ranga‘s were amazing, with even better catches then the record year of 2008. Daily catches per rod were between 2 – 4 salmon per rod in early July – better than ever.
In the north and the west our rivers also did exeptionally well. Laxa in Asum continues to lead the charts with the highest average catches per rod, as well as being the prettiest little river you will ever fish. Blanda smashed her record from last year and yielded a whopping 2.800 salmon – of those 2.200 were caught on only 4 rods in Beat 1! Svarta is also on a good run with over 500 salmon caught and still going strong. The same can be said of Vididalsa, well over the thousand salmon mark and loads of very big salmon (20+ pounds) caught.

Hvannadalsa, Langadalsa and Laugardalsa in the west also did very well despite the long draughts that ravaged the western part of the country all summer long.
Tungufljot continues to show promise, Faxi waterfall is one of the best pools in the country with a high percentage of mw‘s year after year.
In fact, this is the best multi-winter salmon season we‘ve seen in a very long time, especially in the north and the west.

Overall this has been a very good season, despite the draughts during mid-summer that affected many of the Icelandic rivers.
We‘ve started booking for next season and some rivers are practically sold out – it seems everybody wants to come back. We can‘t think of better recommendations than that.
Best regards