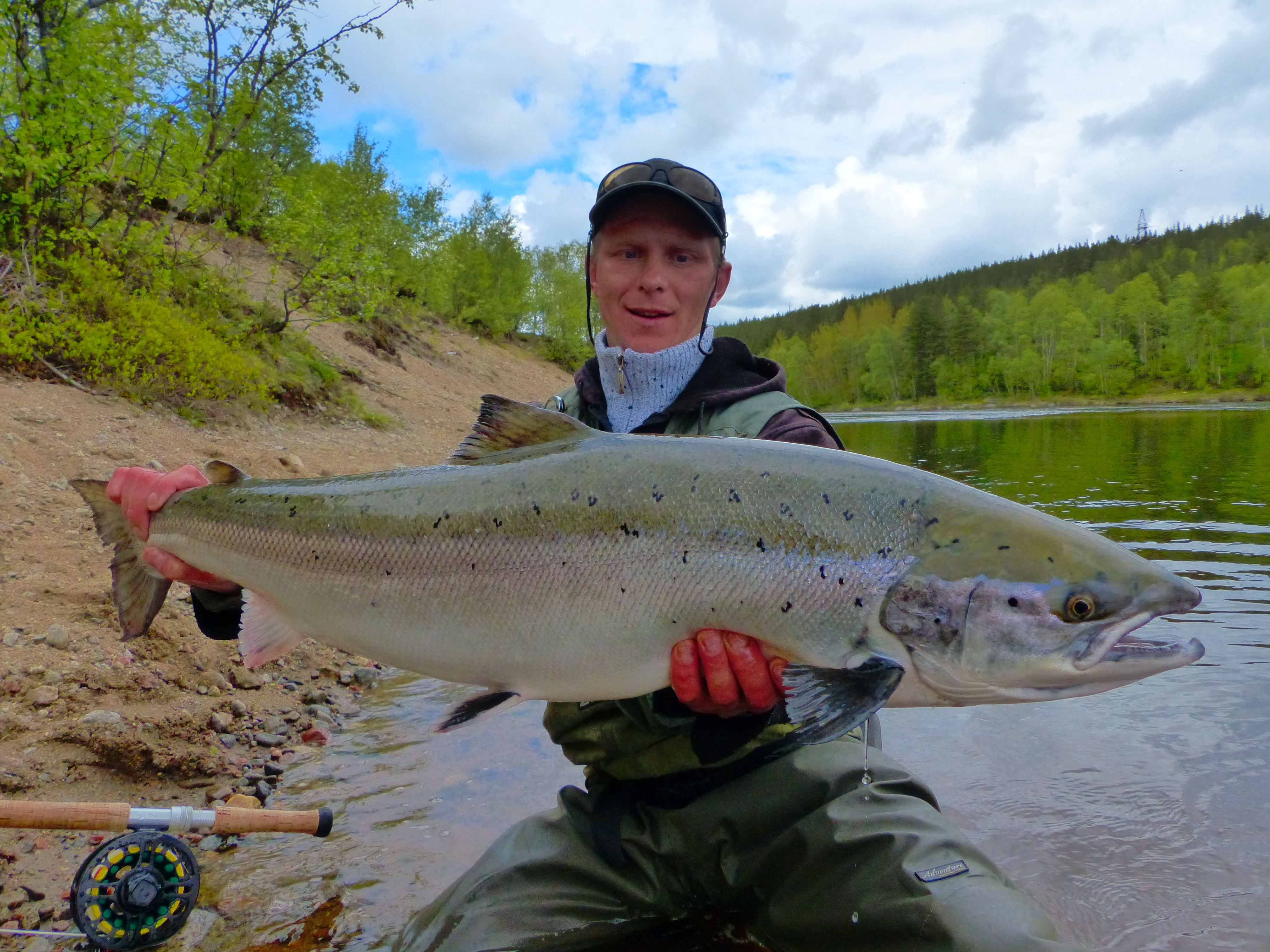 Ever heard about the river Alta in Norway? – well the Kola river is almost equivalent to Alta in size of fish caught.

Since we started in the Kola the largest trophy was a 44 pound fish! Also over 25 Salmon over 32 pounds and plenty of salmon in the region of twenty pounds.

Below is a short history lesson on the catch in the Kola as it can be!

In total the Kola River produced roughly 1800 Salmon between 120 rods No where on earth is there a better chance to get into one of those monster salmon than on the Kola River.

Our guests landed 2600 Salmon during 10 weeks of fishing.

The most productive week saw 512 salmon landed during the second week of July. We had many high scoring rods with 30 to 60 salmon a week.

Again, this year, we managed to land many Salmon well above thirty pounds, and some even bigger were lost.

The spring was cold and fairly slow. By the middle of June things started to pick up and we had very strong runs of fresh salmon arriving, due to good water. 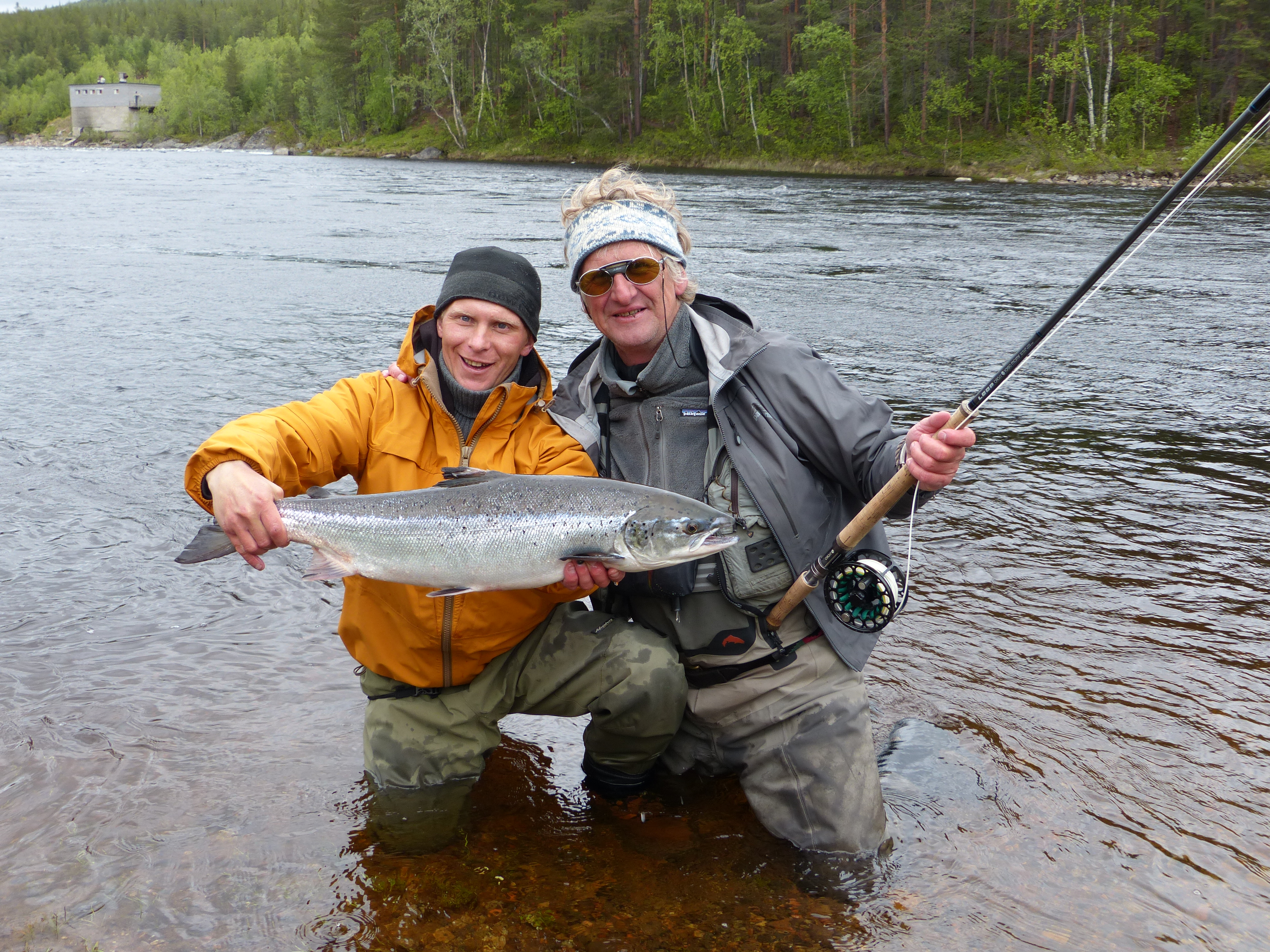 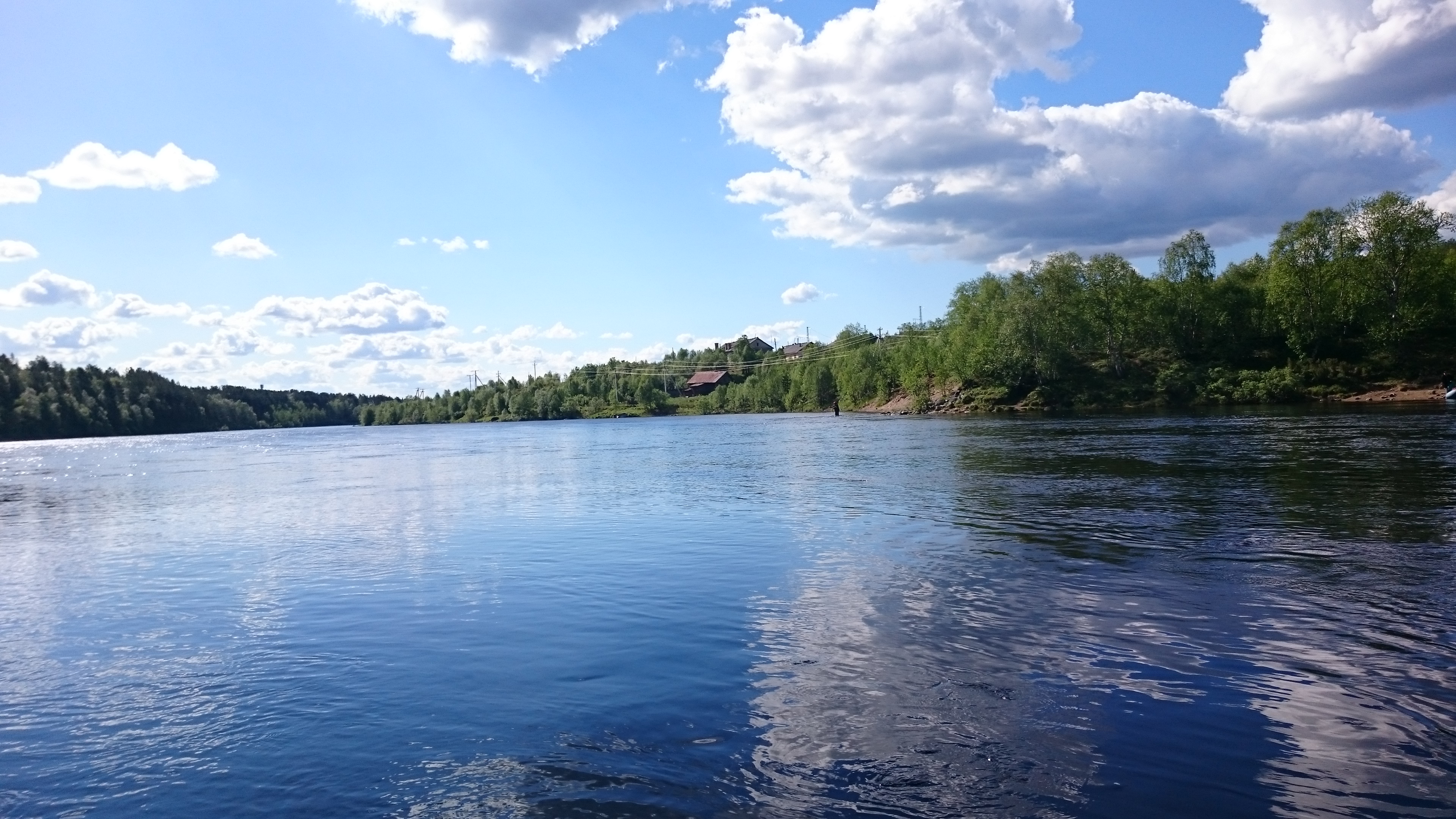 Listening to Arni Baldursson and what he has to say – “I have now fished the Kola for 10 years and before that I had never caught a salmon over 30 pounds.

During my previous 30 years fishing I had landed 25 salmon of between 20 and 30 pounds.

Now having fished the Kola river for 10 seasons I have landed over 100 salmon between 20 and 30 pounds and 4 salmon over 30 pounds plus a 44 pound monster.

It is difficult to handle 100% the poaching on the river no matter how well we manage it, so you may expect to run into a stranger while you are fishing during you week.

We cannot guarantee you a 40 Pound salmon, but here is what we will promise you:

here is what we cannot promise you: 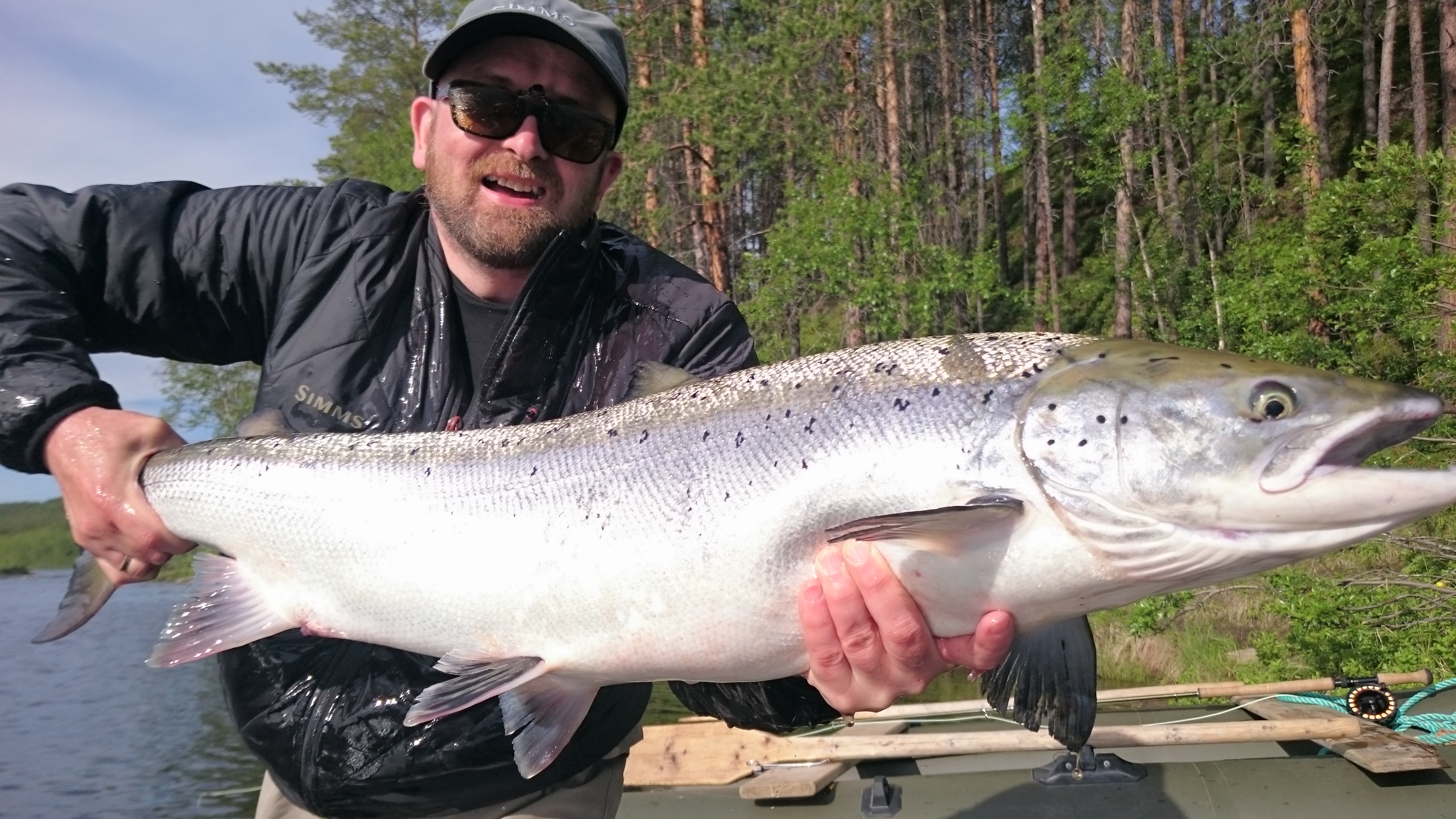 Kola is the largest river on the Northern Kola Peninsula emptying into the Barents Sea. No wonder the entire peninsula derives its name from it.

The Camp is situated about 250 miles above the Arctic Circle just below where the Kitsa (a major tributary and a very fine salmon river in its own right) joins the Kola.  Kola/Kitsa fishery is renowned for its exceptionally strong, large, and numerous salmon.

The season opens in June and the entire month is dominated by the fresh run of the multi-sea-wintered fish averaging between 17lbs – 30lbs. Some monsters are caught in excess of 40lbs. There are no grilse in the river at this time.

The early weeks of June will see high and cold water conditions. Characteristic of the early season dictating the use of heavy tackle, fast sinking lines, large flies and tubes.

Normally towards the 3rd week of June, the fishing is done with floating lines and lighter rods. About that time the water levels drops and the temperatures rise, creating optimal conditions for both fish and the fishermen.

Very often we are asked what rods should be used, double or single-handed. Our opinion is that the double-handed rods are a definite advantage, especially in the early season.

During the latter part of June one can successfully use the single-handed rods.

The fisherman should expect to catch 1 to 3 fish daily and given their size and strength, they provide one with more then adequate doses of adrenaline to get through the day.

Also it’s good to remember that being this far North, you can fish 24 hours a day and double these numbers.

Your guides will take you daily to fish the different pools and the boats prove very helpful as there are many miles of water to cover.

Most of the salmon ascending the Kola end up in the Kitsa — their spawning grounds. The Kitsa provides superb fishing in more intimate surroundings, as it is somewhat smaller than the Kola.

The first weeks of July sees higher air temperatures and lower water conditions. Grilse start running – adding numbers to the caught fish and sheer joy so typical for these juvenile leapers that eagerly grab your flies.

Towards the end of July the run tapers off, however the fishing remains strong as fish are plentiful throughout the entire river system.

Rising water and air temperatures can combine to create more challenging conditions. Smaller flies and stealthier approaches are the order of the day.

Activities on the Kola Peninsula.

Not to much activities here apart from the fishing,you can always add a few more days of fishing to your week on rivers close to Murmansk such as Western Litza , Pecha , Ura and Ulita.

You can stay over night or two in Murmansk for relaxing and experience some of the great night life. There are some good restaurants in Murmansk to enjoy as well. 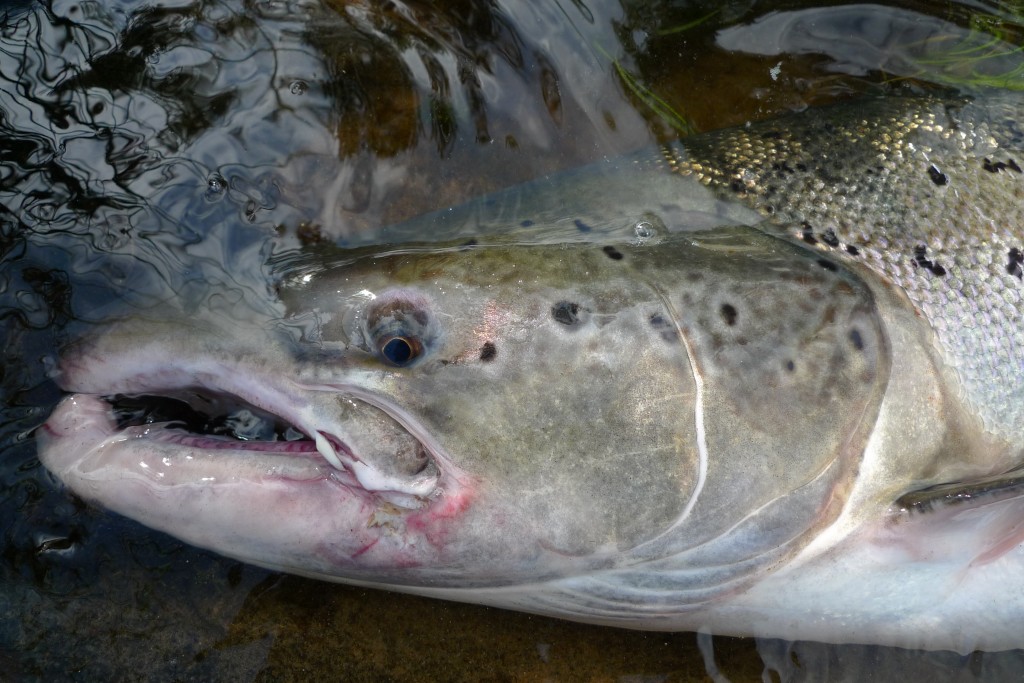 A top quality Reel for Double handed that must contain Minimum 150 meters of 30lbs. backing line.

Floating – Intermediate and sink tips. Bring some fast sinking lines if you are fishing early season. 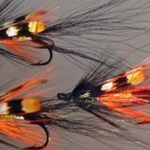 Welcome to a new dimension in flies specifically selected and dressed for rivers of the Kola Peninsula.

Jason Thornton has a vast resource of practical knowledge having experienced all seasonal challenges during 50 actual weeks fishing numerous Kola rivers since 1994.

Following exhaustive field trials of fly patterns and materials, in all temperatures and water heights, Jason has, with his extraordinary fly tier Peter Nightingale, produced a range of 11 flies. Flies that will certainly give you an advantage over the fish and cover the entire season.

Within the listed flies will be found patterns of our own design. All our flies are dressed using premium grade materials including, where applicable, Shadow and Silver Fox, Bear and Polar Bear, Jungle Cock (genuine) and Boars Bristle.

The materials used in the construction of these flies have been chosen to impact maximum movement, color attraction and sparkle.

Jason was truly amazed at the instant success by all these listed patterns during his field trials, finding he was out-fishing by a mile other anglers fishing their more traditional patterns. 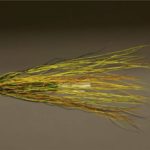 An established pattern worth its place in any fly box. I first tried this fly in 1995 whilst fishing Varzuga and the results were staggering. 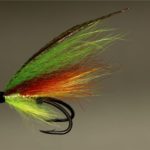 Our version of the famous Green Highlander. Available in double and tube to give a great all season killing fly. 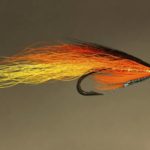 A totally revolutionary fly and from its conception, proved unbelievably successful with fish almost looking for the fly box!!!!

This fly can be fished throughout the season. The pattern is made in two parts – a “main” fly body and a tail section.

On hooking a fish the main fly body runs freely up the line reducing leverage. Fewer fish are lost.

The Shadow and Kola Shrimp are our two favorite ultra effective shrimp patterns. Shrimp fly patterns account for the greatest number of fish caught during the summer period.

Will fish brilliantly in the peat stained rivers of the Kola Peninsula. 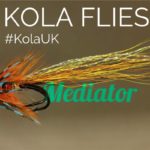 While fishing one of my Kola weeks a dramatic improvement was realized with the introduction of the Mediator.

A summer fly that I will not be without anywhere, especially on the Kola. Long tailed fly, giving contrast and remarkable movement. 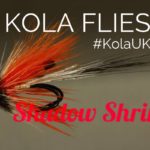 We have found a much improved shrimp pattern which combines Silver and Arctic Fox with vibrant hackling.

Excellent in both strong and quieter flows of river due to the method of tying and the mobility of materials used. 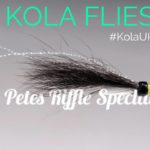 A cheerful and devastatingly effective piece of “precision engineering”.

Based on the famous Newfoundland method of catching salmon in low water. A  small dressed tube with color coding. Available in 0.5″ tube only

Other great flies for the Kola Peninsula is the Icelandic Snaeldas brass tubes in various colors ( they are deadly !!)

Clothes and other items

The weather is very unpredictable and it can change dramatically within very short time.

It will be very sensible to bring both something that will keep you warm and dry in rainy and windy day.

And on the other hand something that is more comfortable when the sun is dancing for 20 odd hours a day. The following list may inspire: 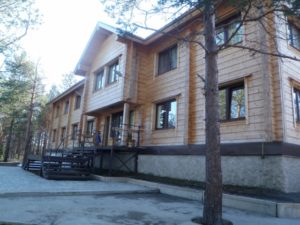 The accommodations at the camp are nice rooms in a large hotel style building. The dining/sitting area is in a separate building.Here one can relax after the day’s fishing, enjoy a drink (or two) with your fellow anglers and share stories about the fishing.

Well, whatever you do, while in the camp you are never too far from fish as they are always within a cast, 24 hours a day. The Kola lodge is only one hour away from the Murmansk airport , very convenient and no helicopter ride needed. 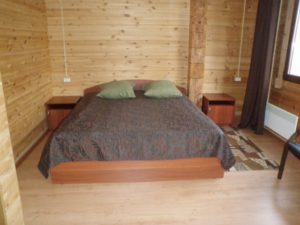 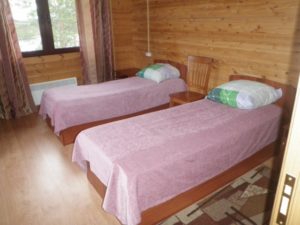 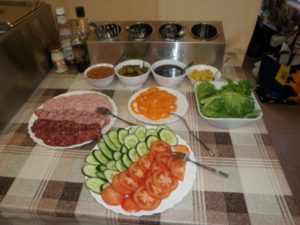 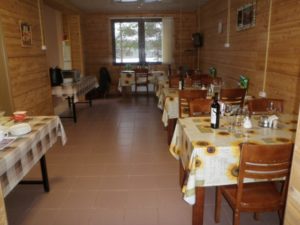 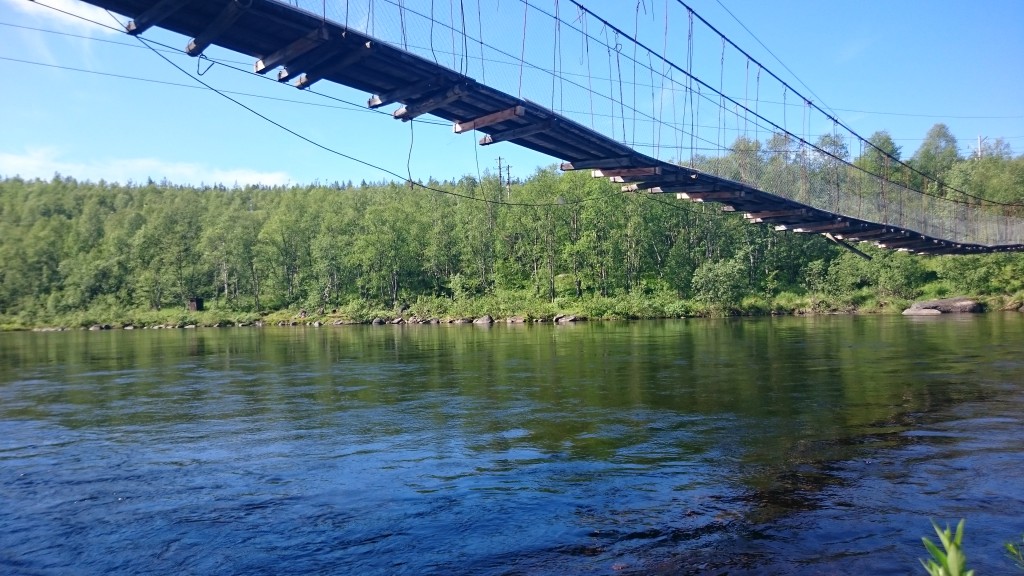 There are several ways to fly to Murmansk!

The most comfortable one is to fly to Helsinki on a Friday night for an overnight stay at a Helsinki airport hotel. On the Saturday there is a direct flight to Murmansk on which we can reserve a seat for you.

Arriving to Murmansk, our staff will be waiting for you when you come through the passport control. You will be driven directly to the Kola river lodge by car.

Drive to camp is approx. 1 hour. As soon as you arrive to the lodge you will have an early dinner then gear up and get ready for fishing on the following Sunday morning.

The return flight departs around 16:00 arriving in Helsinki in the afternoon, giving most of the anglers a chance of a connecting flight to their home destination.

If you prefer to have lunch at the lodge it can be arranged. After fishing you head back to the lodge, where dinner is served around 20:00.

After dinner you are welcome to fish the home pool if you wish, or make a special arrangement with the management of the lodge to fish other beats on the river in the evening.

In that case you would need a car, boat and a guide, which is available at additional cost.

Booking Information: 50% of the price is due upon booking and the balance 4 months prior to departure date.