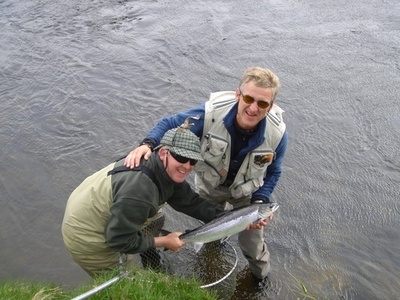 Scotland is experiencing record runs of autumn salmon. Lax-a’s own Lower Crathes and West Durris beat on the River Dee (Monday) recorded what is undoubtedly one of its best one-day catches in decades with 19 salmon landed, including one of 23 lb.
The Tweed, the most prolific of all Scottish rivers, had an amazing day on Monday with 564 salmon, more than the entire catch for last week. The Lees beat produced an incredible 62 fish to four rods, Tillmouth 50, the famed Junction Pool 42 and Upper Floors 38. The best fish of the day weighed in at 30 lb.
Several Tweed beats have already broken summer records this year and with two months of the season remaining, expectations are running high for a return to the good old days.

“Many of us have not seen fishing like this for 50 years,” said one Tweed regular. “It’s a combination of all the work that’s been done to stop commercial netting as well as catch and release and good river management.”
The River Tay recorded a fish of 29 lb on Monday among a total of 184. The Almondmouth beat produced 38 salmon for the day, followed by Lower Redgorton at 33. In the far north of Scotland, on the River Thurso, some anglers have been taking as many as 15 fish a day, all on fly and the vast majority released alive.