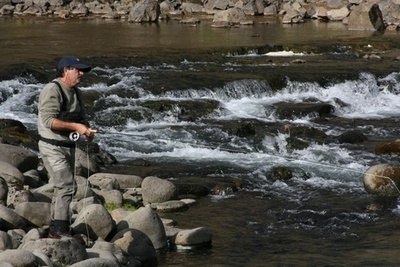 The season is by no means over, however enough has passed to be able to reflect with a great deal of pleasure. My guiding has mostly been focused on Laxa in Asum, and both Rangá Rivers – What a combination. Like most fishermen, I always think about what is next and what I have missed out . So next year I am with no doubt going to be visiting Vididalsá, Blandá 4 and Laugadalsá. Laxa in Asum is with little doubt the highlight of my season with over 1000 fly only fish. I have been fortunate to guide on this geat river on a number of occasions this summer, from the first week of opening to this last week. The river has provided fantastic sport right from the start and keeps on going strong. The quality of the fish is incredible, even last week there were lots of fresh fish with lice. The riffling hitch is highly successful for most of the season, but as the summer drifts away and temperatures start to drop hitching is not so productive. Still small flies work very well, such as tiny Sunray Shadows and the traditional Munro Killer. All great fun on a river which many anglers fish comfortably with a line weight 5.

Both Rangá rivers have been sensational.

East Rangá started a little slow, but this was more than made up by the size of fish. East Ranga has had a fantastic number of multi winter salmon, so sizes (even though not at hand as I write) have been very impressive. The fly of choice has been the Bismo, which is made by Skúli who is the long standing guide of East Rangá. Snilders are also a great choice. Both flies attached to a 40cm tip on fast sinking leader and you are in business! Beat 8 which many anglers think of as the „short straw“ provided my guests with a great deal of good fishing, Móbakki and Tóftahylur have been the most productive pools on the beat. When guiding two rods I returned to my guest fishing Móbakki who greeted me with an enormous smile after landing 3 salmon with in the space of 30 minutes.

West Rangá is „lapping“ the other rivers many times in terms of catch statistics. I enjoyed incredible fishing on beats 1 and 2 with more than 10 fish landed in one session! Beat 6, or the Home pool started the season slowly, however came into its own later on. Amazing fishing was had on the opposite side to the lodge and up 50 metres to the top of the beat. Fishing down with a small Red Frances provided many anglers with the fishing of a life time. The evenings in the last few weeks from 7pm have proven to be a bit challenging as the river‘s temperature drops quickly and the fish become less active. However saying that, it‘s a relative thing!

Whilst guiding a group on Laxa in Asum, part of the same group ventured to Blanda 4 (a tributary to Blanda), and what a gem it is. Very different from the main Blanda beats which represent the truest form of large Icelandic salmon fishing. The beat is very narrow, with runs and pools perfectly suited for the riffling hitch. Great sight fishing can be had as the salmon are visible in some of the pools, but the warning is don‘t get stuck on one place, there is a lot of exploring to do. The lower pools on the beat are easily assessable by car, however to fish the beat fully which is strongly advised, a 12 kilometre walk with amazing scenery is not unusual for the day. The perfect choice for the back to basics salmon angler. And don‘t think that as it is a top beat that only dark and worn salmon get up there, this is not the case, as these salmon hit Blanda and head directly to their home waters.

I must try to get up to Laugadalsa next season. The river is situated in the beautiful western fjords and like many rivers in the area it fishes best later on in the season. This season has produced over 500 salmon on 3 rods which are all sold as a package. The accommodation is a cozy self catering lodge on the bank of the river. Arni has added some new photos website which just look great. If the river can be likened to any river „a mini Asum“ is what people often say. However if you fish this river you will probably describe Asum as a larger version of Laugadalsá! Riffling hitch and very delicate fishing is the order of the day, so think light and go lighter and fishing of a life time is a real possibility. The river has a very loyal following in Iceland, so availability is often a challenge, so trying to book early is very advisable.

I tried to get some fishing on Vididalsa which has seen over 1600 salmon landed this season on 8 rods, but alas I could not fit it in to my schedule. It is the perfect combination with Laxa in Asum as it provides a slightly larger fishing experience and the two rivers are only about 20 kilometres from one another. „Champagne fishing“ was the description one of my guests shouted out to me as he was fighting the fifth salmon of his evenings fishing. Vididalsa is famous for the size of the fish, on what is a medium sized river. Small flies and sometimes micro hitch flies on a 9lbs leader is required as the fishing can be very sensitive. The lodge is my a real gem, with trophy salmon on the walls.. The perfect setting for the end of day stories of the monster fish that got away.

Last year I fished Laxá in Adaldalur for the trout which was one of the best days trout fishing I have ever had in Iceland. An abundance of 3 to 5 lbs brown trout (they get into double figures) lazily rolling to take nymphs, made for a days fishing that I will never forget. Our beat on the river called Arbot is another that I have not had time for this summer, but is a must for next year. The year will give me plenty of time to decide what I should be fishing for, as the river is well known for the size of it‘s salmon. It is a question of do I try to get the salmon or trout of a life time… I will probably be greedy and try for both. Only this last week a 102 cm salmon was landed among six other large salmon landed on just two evenings. The real beauty for me as a family man is that Arbot provides the opportunity to suggest going to a fabulous private lodge for the week which so happens to overlooking and amazing river, that for some reason comes with the lodge!

If you need any advise on persuasion tactics please give me a call or any or our other very well experienced lax-a staff.

Tight lines for the rest of the season