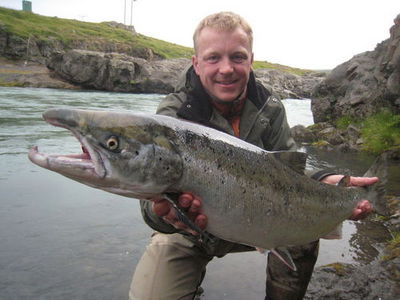 According to reports from the Icelandic Istitute of Freshwater Fisheries, the ratio of multi-winter salmon is extremely high in Blanda, a fact well known to Icelanders but less known to our foreign clients.

Most male mws are around 12 pounds, salmon over 20 pounds are not uncommon in Blanda and most of them are males.

The average weight for females is around 10 pounds, the largest females are around 18 pounds each year.

Whilst prime time in most rivers in Iceland is in July and August, Blanda’s prime season is in June and July.
In June the average daily catch per rod is about 2 salmon, and those are almost all mws. In July the grilse runs peak and daily catches on beat 1 range from 5 salmon per rod to 15 per rod. Last season was a record season in Blanda with each rod in beat 1 routinely catching over 20 salmon a day.