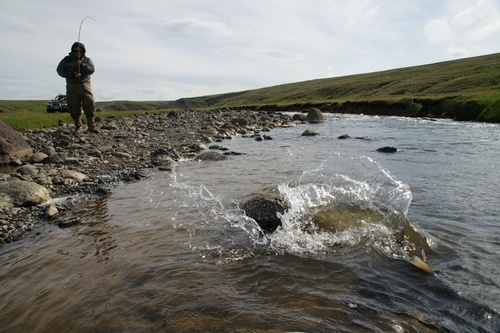 The sound of screeching reels, splashing bars of silvemidfjardara17r and shrills of delight are all but over for this year in Iceland and what a season we have had.

The seasons headlines are filed with the usual suspects which year after year produce figures that make many great rivers look quite ordinary.
Laxa in Asum: over 1100 and number 1 in Iceland for salmon per rod – one of the best seasons ever, West Ranga: the most productive river in the county – fast approaching 10 thousand, Blanda: in the top 5 – not only an early season river! Vididalsa: just a hitching dream with 2000 fish and one of the highest average fish sizes.

Just how high the standard is set is beyond the imagination of many who have never fished the waters of the Iceland and the experience is why our friends and guests return year after year.
Size is important and on this front Iceland is coming from strength to strength. The classic rivers for large fish being Vididalsa and Blanda produced numerous fish in excess of 30 pounds.
Blanda had a fantastic season, one of the best ever with over 2400 salmon. Most know Blanda for beats 1 and 2 and its magnificent pools which are perfect for the double handed spey caster. However Blanda 4 is little known, yet it produced over 400 salmon this summer. The beat is a tributary to the main river and offers delicate and remote fishing, hitching with line weight 5 and a day pack on the back is the style.
East Ranga should not be left out when discussing the size of fish. A quarter of the fish landed this year were 2 winter salmon. Whilst this season was slower than the record year of 2008, the prospects are looking very strong with a strengthening smolt releasing programme it surely a matter of when, not if, East Ranga will see the first 3 winter salmon landed.
Tungufljot produced many 12-18lbs salmon especially at the opening of the season and has continued to fish well through to the freezing cold days of October with a total of 1200 fish and rising on, only 6 rods. Many guests enjoyed fishing the river in combination with either Ranga rivers as they are only 45 minutes drive away and the self catering lodges of Tungufljot together with full service of the Ranga rivers provided an enjoyable contrast. Tungufljot is in the middle of the golden circle and some guests even took breaks from fishing to visit the sights….
The incredible strength of the Icelandic salmon is not new, but it is the news from the angler who has just landed their maiden Icelandic. The short 90 day season makes sure the vast majority of the salmon in the rivers are still sea fresh and full of fight and the cold, well oxygenated water maintains the vibrancy of these wonderful fish. During the last week in August numerous fresh fish with lice were landed on West Ranga, Svarta, Tungufljot, Laxa in Asum and Vididalsa.
With over 22 thousand salmon landed on Lax-a rivers this year the numbers continue to amaze. West Ranga is again at the top of the charts with over ten thousand. However adrenaline packed fishing was in abundance throughout our rivers. In the western fjords, the intimate and delicate rivers; Laugardalsa, Hvannadalsa and Langadalsa provided thrilling fishing. Hvannadalsa and Langadalsa are often fished together and with over 500 salmon between them on 3-4 rods this was one of the best seasons ever. The two rivers share the same estuary which provided some good sea trout fishing. Laugadalsa with a year on year increase of 116 salmon on 3-2 rods, bringing the total to 501 is nothing short of a hidden gem. The prime time for these rivers is much shorter than many other rivers in the country, so even if the numbers do not stand out the reality is that the fishing really does.

The cosy and newly refurbished lodges for all the rivers are nestled in the most stunning landscapes– the perfect family retreats.
Svarta continued to build on its very strong following and produced over 400 salmon. One group had 120 fish in 6 days during mid August when the river hit the 200 mark. Needless to say they have already booked for next year. The river is fast flowing and medium sized, perfect for a single handed 6 weight and floating line with a hitch tube. Svarta is long at over 25 Kilometres and fished with only 4 rods, so the benefits of having a guide are even more pronounced than on most rivers. With the average size of fish being 8 lbs and with many over 20lbs, the single handed rods were more than put to the test.
The good news for the 2010 season is that we have been able to reduce prices by a significant amount, thanks largely to the weakness of the Icelandic Krona. We are already busy with taking bookings so please do not hesitate in contacting us so that we can help plan your perfect trip.
Lastly, thank you to all of you that fished with us this season, we had a lot of fun.

All the best and tight lines,