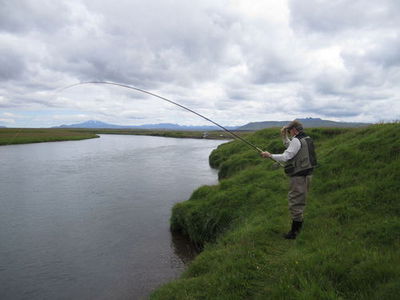 Our good friend Ian Bain wrote to us about his recent experience in East Ranga.

“A small round of applause, not to speak of a sigh of relief, followed the announcement at lunchtime that a fierce-fighting little grilse I’d caught on beat one this morning had become the 1,000th salmon to be landed on the East Ranga this season. And about time too, said everyone present.

Catches are certainly getting better after a dreadful July. There were 59 salmon taken on Wednesday and 88 on Thursday and the runs are coming in, although not in the quantities that we’ve seen in past years.  They are also spasmodic. Fishing beat two on Wednesday morning, I suffered the humiliation of a 12-0 thrashing by the other rod on the beat. It wasn’t because Graham’s fishing skills, while quite sublime, exceeded mine by a such a distance; it happened because we were on different parts of the beat. Simply, he hit the run and I didn’t. At least, that’s my rationalisation of it.

I’ve made up for it, to an extent, by catching 20 fish in the past couple of days. And I expect the emotional trauma of the magnitude of the defeat will eventually go.
All the big catches at the moment are on the lower beats. Beats six to nine are producing three or four fish a day but they are few and far between compared to previous years.  Hopefully, all the beats will soon fill up as new salmon take up residence.
I’ve been coming to this great river sometimes twice in a season for nearly 20 years. I had a new hip last year and a new knee this one and I’m hobbling around in the river, clutching my stick, where I once waded purposefully, but I’m still catching fish.  And that, after all, is a pretty good answer to age and infirmity.”
This website uses cookies to improve your experience. We'll assume you're ok with this, but you can opt-out if you wish.Accept Read More
Privacy & Cookies Policy