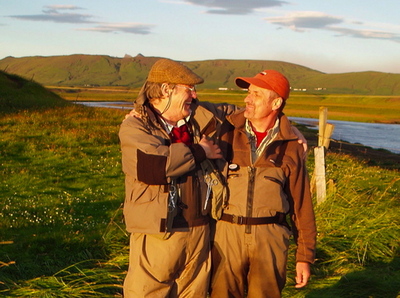 With the East Ranga producing an average of 75 fish per day and the 1,000 mark for the season rapidly approaching, it’s hard for fishermen not to become immersed in the numbers game.

This has been one of the best ever starts for this southern river despite the recent loss of what amounts to several days’ fishing due to glacial ice-melt colouring the water. What has been particularly impressive is the quantity of 2sw salmon. In one evening I had eight of them, the best 6.7kg.

Now that the big runs of smaller fish appear to be underway, catches of the large salmon are thinning out but there are still enough in the river – with more coming in – to make each ‘take’ a moment of great anticipation.

It isn’t always that the loss of precious fishing time has been cancelled out by the quality of the catches, but this time the compensation has been more than adequate. And just being here – even if I’m sporting an unwanted Mediterranean tan at the end of it – has been fabulous.

Walking the riverbank amid the carpets of clover, wild thyme and the assortment of summer flowers is a delight for the senses. The nearby volcano reminds of its presence and potential by emitting plumes of steam and as the sun goes down, the herds of Icelandic horses cast long shadows across the land.

So I finished my week with 43 fish, the last two caught this morning in the murky water on a bright red Francis Snalda that looks like a plumb Santa Claus wrapped in enough tinsel to light up Reykjavik on a dark winter’s night. Or was the total 44? Maybe, but anyway, who’s counting?