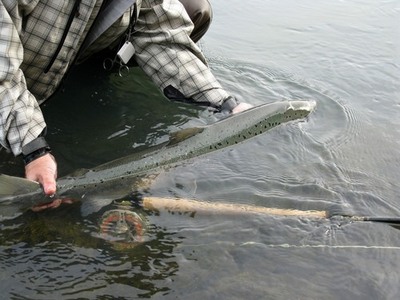 Blanda did not disappoint her fans this summer, for the third year in a row she gave up more than 2.000 salmon – with the majority of the salmon being caught on only 4 rods in beat 1.

Blanda is our first salmon river to open up, on June 5th, and is usually only fished until mid-August. The fact that the season is so short there makes the catch statistics even more impressive.

Beat 1 gave up 1480 salmon, meaning that each of the 4 rods caught 370 salmon in 70 days, this is pretty hard to beat. Add the fact that the ratio of big salmon (over 4 kilo’s in weight) is between 35 and 40%, than the fishing goes from being attractive to nearly irresistible.

As usual July was the strongest month with 900 salmon, August gave 340 salmon and June gave 240 salmon – in June the big salmon ratio is around 75 – 85%.
Beats 2 and 3 were also better than often before with 380 salmon between them. Beat 4 / Refsa was not as good as often before, with around 200 salmon, but nothing to complain about.
On the whole the summer of 2011 was the fourth best season ever in Blanda, it will be exciting to how next season will turn out.