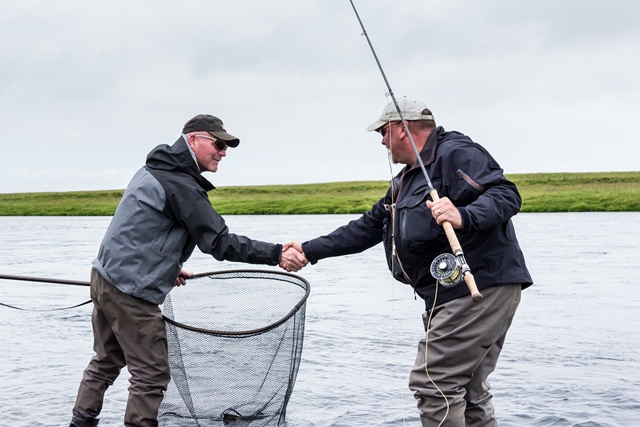 East Ranga.
Lots of great positive changes at East Rangá for 2020 on wards and in to the future. Our partners for three decades Roxtons and friends have now taken over from Lax-a the East Ranga lodge and fishing operation from 2020 and in to the future. We are very pleased with this arrangements and want to congratulate both Roxtons and friends and the landowners for this new fresh arrangements.
We / Lax-a as before we will work in close cooperation with Roxton´s , we will always be available to help with bookings , advice’s and information on what ever you need. Some great improvements have immediately taken place for 2020 , now the whole river will be fly only from the 1st July until the 20th August , new fair rotation program , drinks , wine , beers etc all inclusive in price. There is a great demand for for 2020 for this Iceland best salmon river , so please be in contact to secure your spot , Arni at arnibald@lax-a.is , Johann David at jds@lax-a.is

East Ranga – A New Roxtons Exclusive Destination
We are delighted to announce that the prime fishing season of the East Ranga river is now exclusively to be marketed by Roxtons.

From Roxton´s
The East Ranga Lodge and rods were purchased from Lax-a in summer 2019 by friends of both Roxtons and Lax-a. Subsequently a further agreement was made with the East Ranga river owners to ensure that all rods from 1 July – 3 September were secured (i.e. the entire prime fishing on this very productive river.)

Having sent hundreds of clients to East Ranga over more than two decades, we have always rated this phenomenal river highly. The 2019 season, which in itself was a difficult one for Iceland, clearly showed why the East Ranga is such as good option – ending the summer with over 3,000 fish and was Iceland’s most productive salmon river by a factor of close to two! Added to its impressive productivity, the East Ranga has truly excellent fly water along the length of its nearly 20km and is wide enough to offer genuine double handed rod fishing which is a rarity in Iceland.

East Ranga has consistently cold water which makes growth tough for juvenile fish, and the volcanic sand bed of the river is not consistent with successful natural spawning. Therefore the East Ranga runs a hatchery program and is often called a “ranched river”. Essentially meaning that a number of adult salmon are taken from the river to the East Ranga hatchery each year, where the eggs and milt are combined and the juvenile salmon raised. These juveniles stay in the hatchery through ova, fry and parr stages to when they begin to ‘smolt’ (turn silver and ready themselves for heading to sea, approx. 10-12cm.) At this stage they are released into ponds along the length of the river. These smolts then follow the natural cycle of dropping down the river, typically in May, June and July whilst then heading to Greenland and the Faroe Islands to feed voraciously before returning to the East Ranga after one or two years as salmon of usually 5- 20lbs, with the occasional fish over 20lbs. They are extremely well proportioned, strong fish and fight incredibly hard using both their natural strength and the invariably strong current.

The East Ranga river and lodge are located in a beautiful setting. The river drops from a stunning waterfall down through the varying beats, and eventually meets the West Ranga to form Holsa at the estuary. Standing over the East Ranga valley is the now infamous Eyjarfjallajokl glacier and volcano, which erupted so dramatically in 2010, and its even older and larger sister, Hekla. The meadow river valley is teeming with birdlife and July sees the river lined with purple lupins.

The East Ranga Lodge (“Aurora Lodge”) sits on a private plateau overlooking the river and gazes out toward Hekla. Its twin ensuite guestrooms offer comfort and the main lodge with lobby, bar and dining room ensure great food and a congenial atmosphere. Situated in the Golden Circle it is also a perfect staging post from which to continue to explore Iceland after your fishing trip.

Over the many years that we have been helping fishers access the East Ranga fishing, there have been many thoughts on how to further improve the already excellent experience and to ensure the fishing remains productive for the duration of the season. These have been taken on board by the new leaseholders, and having discussed with the river owners, the following new rules and systems will be put into place for the 2020 season:

B. A limit of 4 fish retained per rod per session (i.e. 8 fish per day) will be enforced, although of course all fishers are welcome to return all fish should they wish and to continue catch and release fishing after the 4 fish limit has been reached.

C. A new beat rotation will be implemented ensuring that all fishers have an even mix of upper, middle and lower river beats during their stay

D. The new fishing sessions will be 8am to 1pm and 3pm to 8pm, 10 fishing hours per day, to ensure we are fishing the river at its optimum time and so as not to eat at midnight which can be a feature of other Icelandic rivers

E. An all inclusive experience such as wine, beer and soft drinks

Prices at East Ranga for the 2020 season range from £3,950 – £5,950 per rod, including fishing for six sessions over three days, shared guide, full board for three nights and all house drinks (house wine, beer and soft drinks.) Sharing a rod is very common in Iceland and with long days and plenty of fish in the river this is a great way to fish at the best times whilst sharing the cost with a friend. Rod sharing rates range from £2,775 – £3,775 and are based on rod sharers sharing a twin room.

As of today we will be offering all those fishers from 2019 the chance to retain their dates and from next week the chance for new fishers or those wishing to revisit East Ranga after some years away, the chance to book new dates.