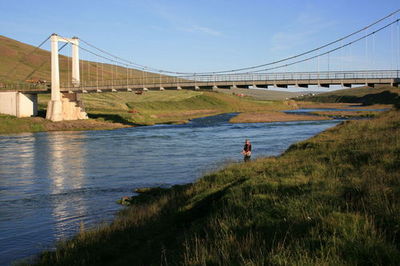 Whilst the lowest beat (beat1) and the uppermost beat (Refsa) in Blanda have become well known in recent years – there has been little focus on the middle beats (beats 2 and 3).
The middle beats are big and powerful and a lot of salmon runs through them every day in late June, all July and early August. They are challenging and demanding – but for the angler that is hard working and ready to test his skills – they can be very rewarding.
There are no lodges with these beats – but anglers can of course stay at the full service Blanda lodge, find other accommodation in the area – or simply set up a tent on the bank.

Beat 2
Beat 2 in Blanda is over 25 kilometers long and holds 4 to 6 rods and has around 50 marked pools and at least as many unmarked pools. Here the river is usually big and wide, relatively calm surface but heavier undertow.
As with beat 1 double handed rods (spey rods) are the best tool, combined with floating lines w/sink tips and traditional Icelandic tubes. But a single handed rod will also serve well here – as long as it is a 6-weight or more and can handle sink tips and tubes.
A fine catch (on the hitch) on beat 2
Even though tubes and sink tips are the most effective way of fly fishing in Blanda 2 – you should not forget to remove the sink tip once in a while and try smaller flies, or even hitch tubes. This 23 pounder (to the left) was caught on a hitch tube in the top pool of beat 2 a couple of years ago.
Most pools are fairly easily accessible by car as the river runs alongside route 1 in Iceland. One can wade across the river in several places – but don’t attempt that without having a guide to help you. On the upper part of this beat the river branches quite a bit, the smaller braches often fill up with salmon in the afternoon and are a lot of fun to fish. As in most challenging rivers – having a guide that knows the river will improve your chances immensely.

Beat 3
Beat 3 is in some ways similar to beat 2, big water – lots of running fish and demanding, but also in many ways very different. Here the river runs partly in a canyon and then spreads out on the lower part.
The river is a little smaller here, since this beat is above the junction of Blanda and Svarta, but is still pretty big. This beat is also much shorter than beat 2, only about 10 kilometers long and only holds 3 rods – so there’s more than enough space for each angler.
The bridge pool on beat 3
Again, the double handed rods, floating lines w/sink tips and tubes are the best tools – but different set ups can also get the job done. On the lower half of the beat the river branches out quite a bit and many of the best pools can be found in these branches. ON the upper part (above the bridge) the river is in a canyon and runs faster. Here the river is easier to “read” by an experienced angler, and most pools are easily accessible by car but some pools require some walking.
These middle beats have been quite popular among local anglers in the past. Plenty of water for every rod, a good chance of catching a salmon – even very big salmon (the biggest in 2010 was 107 cm in length) and the surroundings are both beautiful and steeped in history.