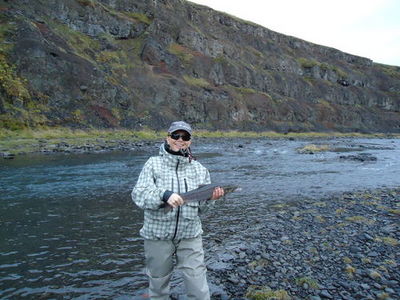 “I had the unexpected opportunity to fish for a couple of hours in Beat 4 in Blanda (Refsá), on the morning of the 16th of September. I and my girlfriend Agnes went up there in to catch her first salmon, and maybe a few more.

This part of the river is a favorite of mine, gin clear waters for most of the season and much of the powerful Blanda salmon make their way up there during the summer and into the autumn. Up there one is in total peace and quiet, stalking salmon and taking in the scenery.

We saw quite a few salmon, even though we only scanned 3 pools – many of them still very fresh. We had not been casting for very long when the first salmon rose and took the fly (Black&Blue tube, ¼ inch), after a short fight it was landed. It was not exactly a typical Blanda salmon, only a 3 – 4 pound grilse, but it was feisty and fresh. A good first salmon. After posing for a photo it was released back into the river.

A few minutes later the second salmon was on, it took the same fly but much more aggressively. On a light gear, this was a good fight. Eventually a 10 pound salmon was landed and released again after its short modeling career.

After this we scouted the next pool above, in it we saw 5 silvery salmon – but none of them were takers. But we were more than satisfied, mission accomplished and we packed up our gear and went on with our weekend vacation.

Below you can see a short photo series of this short trip, hopefully some of you will experience this in the future.